The problem with money

Published by Francesco Ambrogetti on July 19, 2018

I think it is quite ironic that most nonprofits and fundraisers have so much trouble with money. The ways we consider the money we raise and the money we spend are still measured and defined by the old-fashioned rules of charitable activities. Charitable money is a gift, it is free; you cannot spend too much to generate it; you cannot take risks to raise it and certainly you cannot offer a reward to someone who invests in it.

The wake-up call from Dan Pallotta which he made to debunk the overheads myth has not generated the same buzz around a more fundamental issue: the nonprofit sector is starving for the lack of capital and investments. The % of giving vs. the GDP across countries and regions has been stagnant over the last twenty years, the percentage of people giving follows the same trend and few organizations surpass the level of $50 million income or more in any given country. 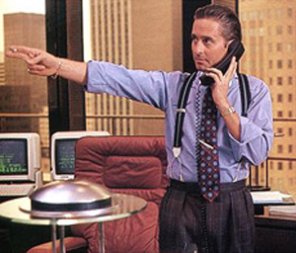 There are various misconceptions in the charity world around the idea of capital, investment and financial return. Some ideas date back to the Calvinist society where charity was an economic sanctuary in which they (the Calvinists) could do penance for their profit-making tendencies, at five cents on the dollars. Some see the financial world as a Sodom and Gomorra populated by Gordon Gekko and Bernie Madoff (and with some reasons). For others finance and investments are so disconnected from ordinary fundraising that they prefer to leave the finance and the capital (including reserves, pensions, shares, etc.) to their financial colleagues.

Just to be clear: there is no better investment – and still this is a great need for many charities – to invest more in a donor-centered fundraising focusing on a sustainable and long-term growth. I still remember the chart that Giles Pegram used to convince his board that investing in fundraising would have resulted in higher yield than investing in the stock market. But, and it is a big but, the way we look at money, capital and investments is wrong, outdated and is one of the fundamental obstacle to the growth of nonprofit.

Lets start with the need. United Nations says achieving the Sustainable Development Goals (SDGs) will take between US$5 to $7 trillion, with an investment gap in developing countries of about $2.5 trillion. At the same time, the most recent OECD DAC report shows that in 2016 total official development assistance reached a peak of $142.6 billion, while philanthropic giving amounted to $ 23.4 billion in 2013-15. If you add the funds needed for research on cancer and other diseases, animal or children abuse, you have also a wider gap. Overall giving is stuck is stuck at 2% of GDP in US and 0.7% in UK.

Where then will the money come from?

According to astudyfrom Fidelity Charitable, a large majority of affluent millennials (77%) and Generation X investors (72%) have made an impact investment, and a recent study from Indiana University found out that 20% of single and 13% of families made impact investments in place of all or some charitable gifts. In fact the so called ESG investing (investment that have an Environmental, Social and Governance criteria for selection and allocation of assets) has now exceeded $20 trillion globally with over 25% from retail investors, i.e., individuals. 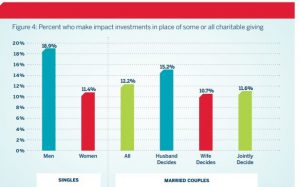 There is an interesting aspect of a broader view than a charitable gift: organizations that receive securities non-cash gifts grew 50% in the last 5 years compared to nonprofits that accept only cash that grew only 11% according to a landmark study of Russel James on more than 200,000 nonprofit organizations. The fascinating part is that this is partly due to the way our brain works, or how mental framing works. When fundraisers ask for cash said James – they are asking from the small bucket because wealth is not held in cash. This makes a psychological difference because it changes the reference point for the gift. A donation could seems too big when compared to other expenses, but too small compared with non-cash assets (shares, properties, etc.). Donors may never have considered giving from wealth rather than from spare income. Research demonstrate that people are much more willing to make charitable donations from irregular, unearned rewards than from regular work earnings.

The implication here is not suggesting to fundraisers to become traders, but to engage in creating and testing new products and opportunities that can attract investments for our causes. There is a plethora of financial products branded ESG, SDG, green or social that have nothing to do with social or environmental missions or causes and that are not related to or support nonprofit organizations. The important point is to consider this not as a marketing tool or tactic but as a strategic move to expand how individuals allocate their money, not self-confining our offer to their charitable giving. It also has to do on how we influence and shame/reward good and bad companies (also boycotting when needed), through their scoring and buying or influencing their shares. And it has to do on how we interact with HNWIs and foundations opening more opportunities for their asset allocation. Investments in other words cannot be left to financial advisers and banks only.

At a broader level, the question is: can we attract and mobilize large financial capital, in addition to the philanthropic donations, toward our causes? Here we enter in an uncharted territory where the term innovative finance includes many different things from cause-related marketing to levy on alcohol or on-air tickets, equity, loans and other forms of financial investments. But the question behind all this is: Can we attract substantial capital that allow nonprofits to double in size and impact, and allow investors to take the risk and get a return?

There are some examples: The Vaccine Bond by GAVI substantially changed the impact and delivery of vaccines. GAVI has been able to raise US$ 5.7 billion from investors, shift predictable donor funding through time and doubled its spending on immunization programs. The recent Humanitarian Impact Bond of the Red Cross embraces the idea that investors can be repaid (including risk of losses and rewards) depending on the outcomes achieved.

Certainly, this is new territory and includes some risks, but the idea is for the nonprofit sector and fundraisers to play on a broader field, attract larger capital to complement and support fundraising and philanthropy. We cannot keep social impact or social enterprise separate from fundraising and we should reject the old-fashioned charity definition that limit our sector to grow and to take risks.

This is not the end of fundraising or charity as we know it. Instead is a more modern and broader version in which the financial support to a cause or a vision is not defined and limited by the cash we can raise through philanthropy.

Capital and the private sector are not better than nonprofits in fixing the world and there are distortions and risks. But if we believe that this world needs to be fixed, we cannot do it only with philanthropic giving, as much as generosity and empathy we can and will be able to generate. As the president of ICRC said we are happy to talk to the Taliban to find solutions. I dont see why we cant do the same with bankers.

The point, however, is not only just talking to bankers, but to embrace a different view on the scope and the size of resources needed for nonprofit and stop thinking and asking only for the spare change.

Francesco is Innovative Finance and Partnership advisor at Capital Development fund of the UN. Before joining the UN in NY, he was the Director of Fundraising and Marketing for UNICEF Italy, leading a $70 million a year revenue programme. He has over 20 years' international fundraising experience with UNICEF, UNAIDS and UNFPA in Geneva, Bangkok, and Panama, and has advised organizations like the World Bank, WWF, MSF, and The Red Cross. He is teaching fundraising at the University of Bologna and authored various articles and books on marketing and fundraising, including "Emotionraising: How to Astonish, Disturb, Seduce and Convince the Brain to Support Good Causes" (Civil Society Press, 2016).

This is such an interesting and engaging post, thank you! Of course the ideal would be for money not to matter, particular for non-profits, but of course, it always does. If we can restructure the way the sector views money and fundraising, this might make a real change.