What is Voice Tech and why should you care? 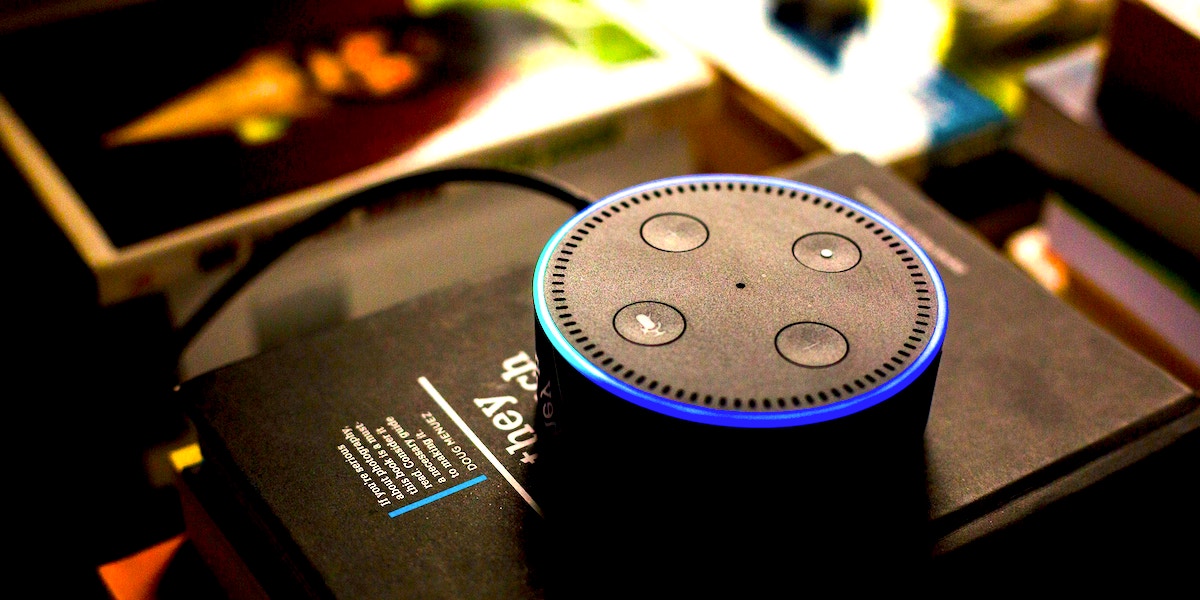 Voice assistants — the collective term for the software including Alexa, Siri, Cortana and OK Google — are popular and growing.

Let’s start with the hype:

What is Voice tech?

More than being a very popular gimmick, Voicebot.ai — the leading website analysing voice tech — describe this as the next evolution of interaction with tech: from clicking on a PC, to touch on smartphones, to voice.

The most popular uses are those that naturally work best by voice, for example playing music, reading recipes and setting timers while you cook, telling rubbish jokes to entertain the kids.

In the same way that smartphone usage changed the way people interacted with devices, the best ‘skills’ — which is what you call apps for Alexa and other assistants — are adopted when they’re intuitive and relevant to how and where people will use them.

Most smart speakers are in shared family spaces: kitchens & living rooms. But people have access to virtual assistants via almost any smartphone or tablet; these are either inbuilt eg Siri on Apple devices, or via an app eg the Alexa App on any tablet.

For charities they present a huge opportunity to connect to your audience in their homes and on the go.

Some charities have been quick to embrace voice, with Cancer Research UK launching their alcohol tracker last year, and British Red Cross launching First Aid, so you can say ‘Alexa, ask First Aid how to treat a nosebleed’.

The Breast Cancer Care ‘Taking care of your breasts’ guide for self examination is a great example of something that naturally works in this medium. There are step by step voice instructions for a task you need to use your hands for.

So I’m delighted to announce we’ve launched an NSPCC skill for Amazon Alexa.

It will help deliver our core purpose: keeping children safe, through playing the PANTS song & interactive voice game to help them learn their bodies belong to them.

This song and game existed in other formats as part of our PANTS campaign so it was a natural fit to move them to a voice medium. And because we couldn’t deliver services without income we’re also accepting donations through Alexa — becoming one of the first UK charities to do so.

What next for Voice tech?

It’s worth emphasising that voice tech is still emergent, with changes happening all the time, and Alexa crashing on Christmas day from unexpectedly high usage.

A stat reported by The Information last year suggested only 2% of Alexa owners had made purchases through their devices (although Amazon claimed this was inaccurate, and purchases were made by around 20% — I assume the latter number includes pre-purchase research).

This may be question of maturity: people were slow to start purchasing online initially too.

Or it might be about convenience: except for repeat items like groceries, people want to see or touch purchases.

Either way, it might be a shrewd move on Amazon’s part in October 2018 to allow charities to accept donations, and build trust in the eco-system. Time will tell.

The phrase you use to open a skill on Alexa is made up of various constituent parts:

Our A-Z guide to the WTF of voice tech:

Where can I learn more about Voice Tech?

Here are some other sources of info:

This article was originally published on the NSPCC Digital Team blog, The Digital Dunk.

Louise is Lead Digital Producer at the NSPCC, where she manages all new technology used to accept donations and engage with supporters. She designed the NSPCC’s first Alexa skill and worked with their corporate partner 02 to create two additional skills for Amazon Alexa, making the NSPCC one of the first charities in Europe to accept donations, and one of the early adopters of voice technology. Her 10 years in the charity sector include organisations such as Macmillan Cancer Support and Copper Digital.

Your style is unique in comparison to other folks I’ve read
stuff from. Thanks for posting when you’ve got the opportunity, Guess I will just bookmark
this site.