Exactly one year ago, I read a blog post that hit me like a punch in the gut. It was Austin Kleon’s How to Steal Like an Artist, and it got right down and spoke directly to everything I was struggling with at the time. I was about to finish grad school and was terrified that I didn’t have what it would take to make it out in the ‘real’ world. Simply reading Kleon’s words changed my whole outlook. I immediately wrote in my own blog about how it made me feel. That post then turned into my first TEDx talk two months later. The reaction from nearly everyone was one of complete understanding. It turned out I wasn’t the only one with those fears and insecurities – I was just finally saying it out loud.

Well, it’s just happened once again. Some wonderful blogger out there has just seen straight into my soul, right at a time where I need that reassurance. And because I wasn’t the only one worrying about these issues last time, I absolutely must share in case any of you have been feeling the same way.

The blog post I’ve read this time is from one of the Copybloggers, Sonia Simone. She’s written a list called The 7 Bad Habits of Insanely Productive People. Because according to Sonia, many people are too hard on themselves for having qualities that society has deemed ‘bad’. But these are qualities that actually tend to be common among highly successful creative types. She does mention that having all seven traits may not be the ideal (Oops! I do!), but you should be reassured that if you have a few, you’re in good company. So embrace them and learn to use them to your advantage!

Let me break them down for you, with the hope that you’ll find a bit of reassurance in the list yourself.

As a very sensitive, emotional person, I’ve had a hard time taking criticism at work. Only because it’s a job I truly care about – I pour my heart and soul into my writing. But hearing criticism is part of the game, so I’ve been telling myself a thick skin is going to be necessary to get ahead in the business of fundraising. That’s why Sonia’s words were so comforting to read as she explained that so many creative people are also very sensitive and perceptive. It’s not something you should try to change. The trick to making this trait work for you is not to let yourself be held back by the fear of criticism.

Now this trait may not be an ideal one but it’s definitely common. Sonia puts it well: ‘If you’re building something epic, you’re going to be juggling a lot of pieces.’ So if you’re like me and sometimes, despite your best intentions, it takes you a week to email a friend back, or you never quite seem to find time to keep in touch with loved ones (or go to the gym!) – cut yourself some slack. People who are highly productive tend to also be extremely busy. It always tends to feel like you’re running to keep up. But as Sonia writes, this trait tends only to come out when things get really interesting. So don’t beat yourself up over a little flakiness. Do your best, say you’re sorry when you screw up, but don’t stop pushing just because things get messy. If you’re stretching yourself, you’ll drop the ball sometimes. Just make sure your priorities are strong enough that you’re never letting yourself drop the ball on the really big things.

Lucky for me, one of the benefits of living with only-child syndrome, is that I’ve never had a problem with the infamous work-life balance. But I know many people who struggle to put themselves first. Insanely productive people are selfish enough to realize that their happiness is an important part of the equation. And that’s part of the reason they end up being so productive in the long run. They’re ready to bring the most to their work – they aren’t burning out because they take the time to relax and do the things they love. So take the holidays you’re entitled to and enjoy them. Stay home when you’re feeling under the weather. Don’t feel you have to sit in office for 10 hours a day to get ahead. Treating yourself well translates into better, more productive work in the long run.

This one speaks directly to fundraisers – fall in love with money! Sonia writes: ‘Money can tell when you’re allergic to it, and it avoids you.’ This sentiment reminds me of that book The Secret, which talks about how thinking positively about something will attract it into your life. So think only about the wonderful things money can bring – feeding hungry mouths, vaccinating the sick, bringing the world joy through the arts…the possibilities are endless. And remember, to give it away you have to earn it first. Money won’t come to you by magic – you’ve got to work hard to get it. But truly value it.

Some people can work with extreme focus and discipline. I’ve never been one of those people. I’ve also felt like I was doomed because of that fact. Those people just look like they’re going to be a success, whereas I look like a complete flake half the time (see bad habit #2). But Sonia references studies done with college students to test their creative ability. Those with ADHD or less ability to focus perform much higher. I don’t have ADHD but it’s nice to hear that being easily distracted can be just as sure a sign of success. And it picks up on something my bosses have recently told me – you’re far better able to come up with creative ideas if you know a little about a lot. Have numerous interests outside of fundraising. Learn as much about as much as you can. It comes in handy and expands your idea bank. ‘The more widely you read, look, watch, listen, and think, the more genuinely remarkable your ideas will be.’

‘Self-doubt’ was actually the subject of my TEDx talk last year. Most people I know have an element of this and, it’s true, we’ve been taught to believe the people at the top are completely sure of themselves. But doing that talk taught me different. So many people came up afterwards and confessed that they still suffer from so-called ‘Imposter Syndrome’ – professors, managers, heads of companies…all people that seemed perfectly confident from the outside. But a little self-doubt can actually be a good thing. Not only does it keep you humble, it also keeps you questioning yourself and your ideas. And the more questions you ask, the more you learn. Again, just don’t let it hold you back.

And along with your internal self-doubt, bring a bit of external arrogance. Because if you don’t sell yourself and your brilliant ideas, no one will. If you produce good work, talk about it. As long as you can keep the asshole out of arrogance, the world will start to believe the hype. Sonia puts it wonderfully: ‘The line between savvy and jackwad is indeed a fine one.’ Just don’t talk yourself up if you’ve got nothing to brag about. You must first produce good work.

So there you have it. Did anything strike a nerve with you? Feel better about any of your so-called bad habits? I certainly do. I’d like to think these seven qualities have the ability to serve us well if we learn to how to use them to our advantage – they truly have the potential to help or hurt your success in the long run. It’s wonderful to think we don’t have to change our fundamental qualities – simply practice better self-management.

Margaux is currently living in Sydney, Australia, working closely with incredible clients at Flat Earth Direct, creating digital and direct mail campaigns with them to help change the world. This Canadian fundraiser misses her compatriots in London and Toronto, where she learned almost everything she knows, but is enjoying the Australian sunshine a little too much to leave any time soon.

Thanks, Margaux. Embracing these points everyday :)

Got any suggestions on how to fundraise for a Kickstarter project. I am definitely the creative type like yourself and have come up with some ideas (like holding a contest) but pushing the needle past this point is agonizing to say the least.

You can find the Kickstarter Project at http://kck.st/Bedtime_Travels

Thanks again for your great post and I loved your TEDx talk.

The key with criticism is to judge whether the feedback is negative feedback or improvement feedback. If it’s the latter and you think it’s worth taking on board and you can do something about it, there’s usually no harm in trying it out. Beware; there are always those out there who just want to criticise for the hell of it!

I used to be extremely sensitive to criticism/improvement feedback, however after many years, I’ve learned that taking the good out of critical comments makes you a better person. Don’t avoid feedback/criticism; actively seek it out :-)

FANTASTIC blog. Even if it wasn’t, well, *your* article. But it was.

Because you did something we (good) fundraisers do ALL the time: you stole.

I recently wrote that one of the things I love about this industry is that we don’t go in with all this “Imitation is the highest form of flattery”. We just call it what it is: STEALING. Of course, with a bit of “tweaking”, then it becomes “ours”, until, of course, someone else steals it. Again.

Agree with every point that Sonia put out, and will go out immediately and fire my therapist. :-)

And as a huge TED fan (sorry I have miss you to date) I will go watch yours, now.

It’s impressive that you are getting thoughts from this piece of writing as well as from our argument made at this place. 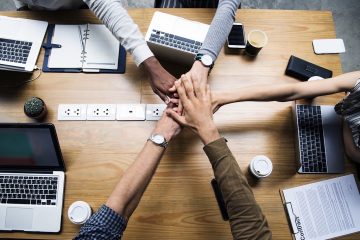 Change by Design: Weathering the Storm with Your Team (not at their expense)

Change happens in every organisation. And I’m not talking about the ‘disruptive,’ buzzword kind of change. I mean change as your industry evolves, your team evolves, and your leadership evolves. When any of those (and Read more…