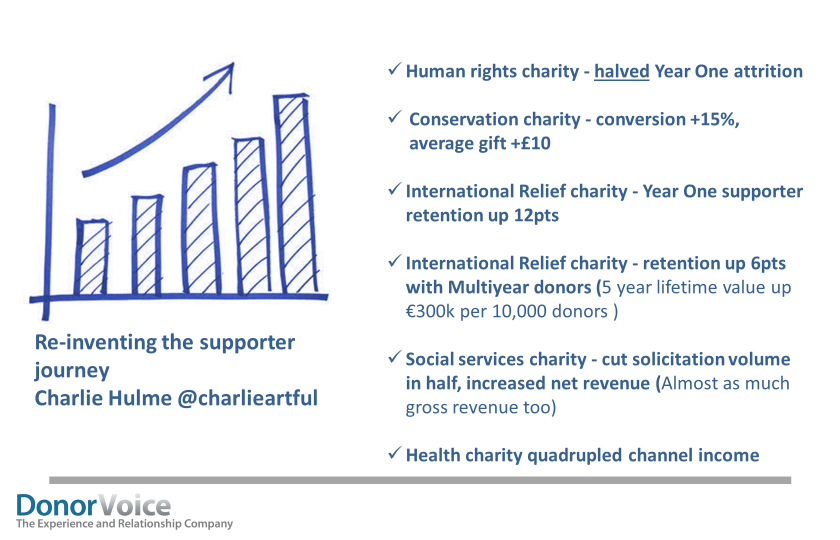 Thinking of investing in segmentation? Be careful of these common and costly mistakes

Fundraising has never been easy. But it’s never been this hard. So, in an effort to fix the acquisition and retention problem, the sector’s looking for new/better ways to profile and segment prospects and supporters. Read more…

Why it’s almost impossible to fix your stubborn fundraising problems

How to get from good intentions to a great supporter experience

The Commission on the Donor Experience (CDE) officially launched last week. Its premise is give supporters a great experience and they will give more and for longer. So: 1. Do we believe that? 2. Aren’t Read more…

Why fundraising is so hard, and how ‘why’ can make it easier

May 2015 was a watershed month for our sector. The tragic death of Olive Cooke, and the subsequent media mauling, forced us (or at least some of us) to re-examine our “best” practise. In the Read more…

How to fix face-to-face fundraising

This graph shows face-to-face attrition, in the first three months, for an enormous UK charity. It’s more than likely a very familiar, and frustrating, image for you. In fact, it’s so familiar that a recent Read more…

I’d be shocked if there were any, or many, Trump supporters among this community of fundraising hipsters. But how many otherwise great people inadvertently emulate him as fundraising practitioners? What do I mean? Well, if Read more…

Why are we fundraising and how can we do it better?

Another year, another IFC. Another round of presentations ranging from the transformative (none more so than this masterclass, ‘Reinventing the Donor Experience’ by Kevin Schulman and Adrian Sargeant) to the tawdry (tempting but unfair to Read more…

What are the Two Most Dangerous Assumptions in Fundraising?

Thinking the reasons why people give doesn’t matter        Thinking we know why people give Assumption #1 is beyond redemption (you can’t fix stupid!) Thankfully although it still pervades a few of the bigger, Read more…

How answering ‘Why’ and ‘What’ could change your fundraising

a.k.a. how much money would you raise if you knew anything meaningful about ‘your’ donors? Do you recognize her? She’s been on your house file for three and a half years now. Each month she Read more…

The data that re-defines ‘good’ fundraising

Why nothing works, why it won’t and how it will (or at least could…)

Put your hand on your heart. This time last year did you honestly think fundraising was doing well? If your answer is ‘yes’ stop reading. Come back in the 5-10 years it’ll take you to Read more…

We’ve learned from our mistakes and can repeat them exactly

Preview of a NEW IFC SESSION, led by you… Nothing better sums up our sector than a line from a sketch by Peter Cook and Dudley Moore: Dud: Would you say you’ve learned from your Read more…

Are we really going to pretend it didn’t happen?

Our sector’s never taken the kind of media mangling it took earlier this month. (For anyone outside the UK who doesn’t know what I’m talking about quickly Google ‘Fundraising in the UK’. You will see Read more…

How to be relevant to your donors

Six major international development charities were asked a very simple question; “what’s the reason donor’s support you and not your competitors?” Each gave their answer. A cross section of their donors was asked a similar question; Read more…

A tale of two donors

or The ENORMOUS difference in value between ‘what’ and ‘why’ Charlotte and Emily have never met. They are the same age, live in the same area, have the same income, the same outgoings and the Read more…

How to reduce attrition 50% by doing (almost) nothing

This is how my daughter plays hide and seek. She thinks if she can’t see me then I can’t see her. In defence of her strategy she’s only two years old. But isn’t this exactly Read more…

Question: what do all recent fundraising success stories have in common?

Answer: None of them started with fundraisers! Fundraisers here at IFC and all over the sector are raving about the spontaneous phenomena of the ‘No make-up selfie’ and the ‘Ice Bucket Challenge’. But in our Read more…

Is anyone’s loyalty programme actually working (and, just to clarify, I’m using the more traditional definition of ‘working’ as you used to lose loads of donors but now you don’t)?

I’ve never met anyone (who wasn’t selling such a programme) who could answer ‘yes’. But that doesn’t stop us squandering enormous amounts of time, energy and money on an entirely unproven ‘best’ practise that’s making things worse. I know several fundraising directors who know for sure retention got worse after they introduced their loyalty programmes. But they continue to run them. It would be funny if it wasn’t tragic.

END_OF_DOCUMENT_TOKEN_TO_BE_REPLACED

Have you ever noticed that no matter how hard you work, no matter how you segment your file, and no matter what ‘story’ you tell nothing ever changes? It doesn’t matter what agency you use or what you test, year in year out net result is predictably and depressingly, the same. Yes, there are shining exceptions, but they’re exactly that. On the whole our sector hasn’t seen real mission impacting growth since the 1970’s (in other words since before many of us were born!)

END_OF_DOCUMENT_TOKEN_TO_BE_REPLACED

Where to find all that money you’re losing

You’re grocery shopping on a tight budget. You’ve got everything you need and a few things you want. You approach checkout knowing the £40 in your pocket will just about cover everything. But when you come to pay you find you’ve lost £10. Do you:

2)      Decide to do without a quarter of what you intended to get? END_OF_DOCUMENT_TOKEN_TO_BE_REPLACED

How Much Money Will You Waste This Year?

2013 was full of negative press about wasteful charities. Much as we refute the claim the fact is we are wasteful; just not of the things we are accused of.

Real waste is the money we spent on PR and strategists who had us cowering rather than robustly defending ourselves. How many potential donations have we wasted by obfuscating instead of standing up? Why did we accept the premise of the accusations and whimper rather than reject it and fight? When did we decide people were too stupid to understand it would take more than a £3 donation to save the world? END_OF_DOCUMENT_TOKEN_TO_BE_REPLACED

Thoughts from IFC 2013 Whichever numbers you look at, from whichever angle you look, retention rates in our sector are appalling. Why? Well have you ever thought that the way we bring people in is Read more…

It’s tragically ironic that ‘Relationship Fundraising’ comes of age in a year when donor retention is at an all time low. When Ken Burnett published his book 21 years ago his definition read: “Relationship fundraising Read more…

How to Make Your Story Stand Out

Everyone in the sector is trying to tell their story. The power of storytelling was showcased earlier this month when 20 well known fundraisers shared tales that had inspired them at SOFII’s ‘I Wish I’d Thought of That’ (or, in my case, ‘I Wish I’d Gone to That’!)

But if everyone does it how’s yours going to stand out? END_OF_DOCUMENT_TOKEN_TO_BE_REPLACED