In praise of the transformational fundraising entrepreneur

Why we should all adopt the retiring Giles Pegram CBE* as our role model.

The police officer was puzzled. The women driver appeared to be quite annoyed about the fact that he’d pulled her over. Yet there were three children in the back of the car, and none was wearing a seat belt.

‘Why,’ asked the officer, in his most tolerant voice, ‘are these children not wearing seat belts?’

The woman’s indignation mounted, visibly. ‘Well…, ‘ she responded huffily, ‘they’re not my children…’

SOFII Star. Giles Pegram has been setting the standard for great fundraising since the late 1970s. Read more on SOFII.org

The point is, people often do strange things, for no good reason. So trying to understand and anticipate them is a complete waste of time.

The exception, of course, is fundraisers. They generally play safe,  always seeking to have a tried and tested reason that will justify everything. So they’re much easier to understand and anticipate.

And much more boring. Perhaps, though, that matters less than the possibility that they may also be much less successful than they could be.

Take that client of fundraising sage Bernard Ross*, who wanted the obviously much cleverer than he Bernard to come up with ‘a startling piece of innovation’.

When Bernard duly unveiled the product of his brilliance, the quite satisfied client responded with, ‘Fine, Bernard, brilliant in fact. But how do I know it will work? Have you got anyone who’s actually tried it?’

These short tales illustrate two kinds of stupidity. The blinkered kind, and the cautious kind. Both are endemic, in our profession.

Emotionally at least I feel it preferable to be a reckless failure than a cautious or blinkered success. But I’m in the minority in that. Thankfully, there’s something far better than both. That is, the entrepreneurial risk-taking change-maker, who isn’t reckless but takes her or his time and does things properly. In this piece I want to pay tribute to one of these, and draw out a few useful lessons from his initiatives.

We all know that if you want to succeed big time you have to take risks. Fortune favours the brave, no guts, no glory, and all that. Well, that’s what we all say, even though what we mostly do is a different matter.

Not for all of us. Some fundraisers, even in these cautious times, have creative risk-taking hard wired into their DNA.

One of these is a man who goes by the unusual name of Giles Pegram. He’s recently retired from his position these last 30+ years as director of appeals at the NSPCC, one of Britain’s most loved and respected top fundraising charities,

You’d think that anyone who’s been in the same job for 30 years must be in something of a comfortable rut. Not Giles Pegram. If you assume this then you’ve obviously not heard of the famous NSPCC Centenary Appeal, nor of its equally striking but even more ambitious and more recent counterpart, the NSPCC Full Stop Appeal.

Both of these mega-appeals are featured in some detail on SOFII (the Centenary Appeal is there and the Full Stop campaign will be soon) so I won’t repeat them here. You should study them in full as they contain more potential lessons for how to change your organisation for the better than most fundraisers will learn in a lifetime.

I will simply use this opportunity to explain why I think we should all view this guy as a role model to emulate. If we could be like him, voluntary activity would be quickly transformed into something many times more powerful, more important and more effective than it is now.

Why? Because Giles Pegram specifically set out to turn everything on its head, not once, but twice.

In the 2010 New Year’s honours list Giles Pegram was recognised with the award of a CBE, Commander of the Order of the British Empire. Who says fundraisers don’t get the recognition they deserve?

Causing one major transformation could smack of opportunism, or even luck. To do it twice suggests deliberate, determined perversity. Giles needed to completely change the culture of his charity so he set about securing a mandate to do so from the very highest authorities in his organisation. He surrounded himself with an array of appropriate professionals both internal and external.  He encouraged the NSPCC to completely rethink the scale of its ambitions and to gear up for nothing less than the defeat of child abuse. Starting four full years before the anticipated launch of his first transformational campaign he then set the biggest, most ambitious targets that he and his close adviser, the late, great Redmond Mullin, could reasonably conceive.  And he secured the essential investment for doing it. Then, slowly and painstakingly, they put in place the most formidable fundraising machine that the UK has ever seen.

In attempting and achieving these things Giles Pegram showed several specific qualities that sadly are in short supply these days.

Most extraordinary of all perhaps is that, having gone through the pain and exhilaration of doing this once, he then went and did it all again, only on a bigger scale.

Yet, amazingly, like the lady in the car at the start of this story, they aren’t his children either!

In wishing Giles Pegram a long and happy retirement I can’t help but say that I hope he doesn’t go too far away or get too used to a quiet life, for those who might aspire to do likewise – and I’m sure that there are some out there – who will have good reason to call upon him for guidance, now and for many years to come.

*See The Zen of Fundraising, page 129

Ken Burnett is an author, lecturer and consultant on fundraising, marketing and communications for nonprofit organisations worldwide.

The NSPCC have always been one of the fundraising team’s I have followed and admired from afar. I’ve even tried to copy some of their ideas and success. In my view, the Full Stop campaign is one of the greatest UK fundraising campaigns.

I was very fortunate to work with Giles in late 2014 and had the chance to absorb some of his insight and wisdom. Although he may have retired from the NSPCC he continues to help charities with their fundraising and is generous with his time for aspiring fundraising leaders.

He’d be too modest to say, but I think there are few fundraisers who couldn’t learn from Giles’ experience and passion for fundraising.

Shared in part on my timeline:-

FOUND & SHARED: Giles Pegram a funds raiser showed several specific qualities that sadly are in short supply these days. •He took his time. He would not be rushed. He did his homework. •He aimed high and this interesting:-
When one of his trustees baulked at his very ambitious target, suggesting a much lower sum because it would be more surely achievable, his response was to say, ‘Yes, if we aim for £5 million we will get it, whereas if we aim for £12 million we may fail, and only raise £8 million. But which is better, a £5 million success, or an £8million failure?’
His trustees and colleagues followed him, and went on to raise over £15 million, the UK’s largest major appeal at the time.
•He used fundraising ambition and potential to encourage his child care colleagues to significantly raise their sights, bringing dramatic and radical change to the work that NSPCC does for children.
from: “HELPING HANDS create SMILING FACES”, blessings event detailed in https://www.smore.com/cfmk- 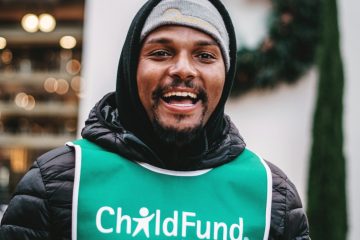