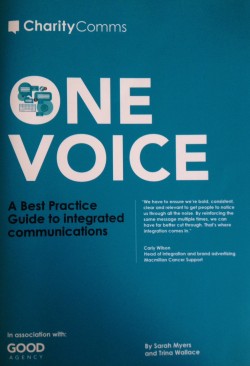 Integration: such an easy word to say, such a wonderful idea. But such a difficult thing to do. A Utopian dream or the latest thing that just makes our jobs harder? It’s not the first time I’ve used this classic quote from Confucius, but he does nail it: “Life is simple, but we insist on making it complicated”.

What exactly are we talking about? Simply put, it’s making sure that your various communications, for whatever purpose – fundraising, profile or campaigning – speak with one voice, so they make the most sense your audience. If you’re not pulling together, you’re pulling apart.

I recently spoke at the launch conference of a useful guide on Integration by CharityComms in the UK, “One Voice. What was interesting but predictable was that only 5% of those attending were fundraisers. I’ve spoken before on integration at a fundraising conference, and found the reverse. Perhaps no surprise, when events are targeted at different audiences. But on this topic, it sort of matters. So here, for you fundraisers, is some food for thought.

We’re past having to make the case for why we should. Instead, we have to tackle how to do it, or more importantly, what’s stopping us. People wheel out no end of excuses as to why it’s too difficult, and they are all, inevitably, just that – myths and excuses.

Here are a few of the big ones, with some mental tricks to get through them – just some different words to think about them differently and to keep it simple. Because it’s all in the mind.

Myth 1: “We do way too much, we are a complicated organisation. It’s impossible.” No, it’s about keeping your message simple. Focus.
What’s your top line message? Your brand story, or narrative? People aren’t that interested in what you do, certainly not all of it. That’s just the “how” you deliver the important stuff. And some of it is boring, so why share? People aren’t interested in everything that you do either. You are not a newsroom they are waiting to hear from, so changing your story every week might keep you busy, but it keeps your audience confused. You have moved on before they’ve caught up, and as a consequence, they barely notice you.

Myth 2: “This doesn’t apply to me, my audience is different.” No, it’s about thinking of whole people. One Audience.
Be honest, are you thinking about your audience at all, or just getting out your activity on time? Of course we have different audiences, but how are you defining them? Usually, I guarantee, it’s by what you’ve decided they do for you. Or to be accurate,what they did first. So they become “donors”, “campaigners”, “e-supporters” (“cyber-activists” is my particular favourite).

By all means work out what your supporters like and want to do for you, but don’t make assumptions based on where and how they start, or which team engages them first, that that’s it – that they only do one thing, or only want to hear from you one way. A decade ago, the earliest analysis in the US about online fundraising and campaigning, whether people did both and whether or not people also responded to direct mail, concluded that yes, they did. “They might not be doing it with you, but they probably are with someone else”. So don’t assume they don’t, or won’t. And above all, don’t assume they are people like you (either age, or level of interest!)

So, think of your supporters as whole people, and see what else they might do, that perhaps you can’t offer with your particular fundraising (or other) objective, or any particular media channel.

Myth 3: “We can’t do this because we haven’t got a massive budget.” No, it’s about business as usual, done better. Alignment.
What exactly do you think costs the money? Having a bigger budget is no doubt more fun because you can do more things, but if anything, having less makes it even more important you think about lining up your messages to have greater impact with the resources you’ve got.

That fundraising appeal or campaign message? Can’t they be about the same issue, at the same time? If not, can you really not identify a theme that does work across the organisation? That email that’s gone out the same day as your CEO is on the radio launching a policy report. About your cut-price Christmas card sale? Really?

So, you’re busy doing the stuff and spending the money on activity anyway. Just line up the content so you look like you know what you’re doing. It’s called being efficient.

Myth 4: “To achieve integration we’d have to restructure the whole charity.” No, it’s about talking to each other. Coordination.
Re-structuring may help you break bad habits, especially if you have developed barriers between ‘silo’ teams, but it’s not really the only answer. If you think about it, structures are only a way of organising a division of labour. And they can depend on the skill sets the organisation needs, and those of the personalities involved. And that’s ok. Ultimately, you’re all the same team, as the same organisation. Do you really expect the CEO to have to decide on everything? No. In my experience, ways of working trumps structure every time.

So if you’ve lined up the organisation’s main message and content, now line up the activity. Yes, it means talking to each other. Think about what the same people might see. Does it fit together? What more could fit together and have for greater impact? A lot of this is basic communications planning. It surprises me how few people do it. Do a wall-chart. Map what’s going on in your world, and when stuff is going out. Meet and talk about it.

Myth 5: “Our communications are already integrated. They all look exactly the same.” No, integration is not about “matching luggage”. It’s about being one organisation. One Voice.
You know that feeling when you call a company, and end up with someone saying: “you’ve come through to the wrong department. I don’t know why they put you through to me”. Sometimes it’s a merry-go-round. Why does that irritate you so much? Because you’re not interested in the difference between teams. You’ve called the company.

Having consistency in visual identity is the easy bit, but sometimes lazy. It can mask underlying dissonance, if different teams are communicating about different things at the same time. People don’t support your department. They might not even support your organisation. What they do support is your cause. That means you have to speak to them about that, with one voice.

So be clear: it is the story that has to be the same, not the look and the logo.

Myth 6: “We’ve got completely different objectives here, so our messages will be very different.” No, it’s about priorities and discipline. Decisions.
Of course objectives are different, and of course how we express messages can be different, but the messages themselves can be the same. It means getting over the desire to talk about everything and working out what’s most important. Few people care about everything. You’re not here to satisfy internal voices and jealous egos.

It means someone taking charge. Editing is about deciding what NOT to include, what NOT to say, in order for the main message stand out better, more clearly, more powerfully. Decision-making means prioritising, and communications priorities can change as the external world changes. That’s life. What’s important is that you take the decisions. And that takes us back to the beginning. Your priority is your focus.

There you have it. If you want to do it and know you should, you will. If you don’t want to, and will find excuses not to, you will. It’s all in the mind.

PS. You can download the CharityComms Guide to Integration, “One Voice”, here. It’s full of great tips, and also really interesting case studies from different organisations.

Matthew consults and coaches through his consultancy Inspiring Action with charities big and small, in the UK and Internationally. He has over 25 years’ experience of charity fundraising, campaigning, communications and leadership, including being Fundraising Director at Greenpeace USA, Communications Director at Oxfam GB, leading a creative agency. He’s a committed conference speaker, blogger and charity trustee. His guiding principle is inspiring people to action, through communications and leadership, with a particular passion for supporter engagement and organizational effectiveness, aligning strategy and culture behind an exciting mission story. Follow Matthew on Twitter at @m_sherrington

Thanks, great article – I will definitely download the CharityComms guide as you mentioned it has different case studies to look at.